... or in other words, I've finally had my first plein air experience.

I promised myself that the next opportunity I had, I would try and be courageous and attempt something plein air. I have been inspired entirely by my blogger friends. I have long been a fan of Keith Tilley and thoroughly enjoy his exploits into the wild and rugged Scottish hinterland where he lives. The first urges to try it myself came from Sandra Busby's account of her day with Sue Pownall and I can imagine how wonderful that must have been. More recently, Michael Bailey's quick sketches have inspired me to finally make the effort. There are others whose blogs have contributed to the many small 'kicks' that have ultimately led to me losing my virginity.

My wife and I have just spent a couple of days on the east coast and the opportunity to embarrass myself in front of scores of strangers finally presented itself. Before I say any more I must say that ALL of the sketches I produced are poor. They were very hastily and nervously scratched out but for me the pleasure, satisfaction and sense of achievement comes NOT from the quality of the sketches, but from the challenge of drawing in public and the barriers I succeeded in breaking down. I am not a confident person and I have a low opinion of my art, so to attempt something in public was a double challenge.

While doing the first sketch of the Beach Garden at our holiday resort, two ladies who had been sitting nearby, passed behind me and one of them said "Wow, did you just draw that?". We exchanged a few brief pleasantries and they went on their way. Though they couldn't see much since I was using a small A5 pad, it was nice of them to comment and made my first experience a pleasant one.

The second sketch was done sitting on a cliff top bench high above Southwold pier. The bench was on the public pathway and scores of people were passing by. None of them spoke and I kept my head down, but I was aware of the passing eyes.

The third effort was a more serious attempt at producing a worthwhile picture, though it had to be done standing up, which I found particularly difficult. Again I used pen but this time on an A4 pad. I had my watercolour pencils with me so I was able to add some colour which I then touched up with my Aquabrushes.

My final effort was a very quick doodle of the view in front of me as we stopped beside a lake for a quick snack.

As I've previously stated, I'm under no illusion as to how poor these are from an art perspective, but this exercise was never about the art. Whether or not I ever reach the stage of attempting a proper watercolour painting plein air remains to be seen, but I will certainly be making a bigger effort to carry a pen and sketch pad with me when I go out and about. To all my blogger friends who have inspired me, thank you. ;-)
13 comments:

The church with the door

Well here is the finished version with the washes added. In reality the area to the left of the church is a combination of dark trees, brick walls and rooftops. It looks very unattractive. This is where my 'need' to put in every detail as best I can often lets me down. On this occasion I've made up an alternative view in order to make a better 'painting'. I had considered not including anything there at all but then realised I needed somewhere for the sky to stop.

The church with the door

I recently posted a painting of a door situated halfway up the side of a church tower and doing the painting caused me to think it would be nice to paint the whole church. On this occasion I fancied doing a Pen & Wash and I decided I'd like the pen work to be complete enough for the drawing to stand in it's own right, before the addition of colour. I think I've accomplished that, though I do keep getting the urge to add another pen mark here and there. One of the things I can't really capture properly are the different architectures. The lower section of the church is made of stone blocks, the upper section of bricks, and the tower itself is rendered. Hopefully the different colours will help in the final painting.
4 comments:

Some time ago I did both a watercolour and acrylic painting of an old Lime Kiln I'd discovered in Yorkshire. It was the perfect subject for my first hatching experience. It is extremely similar to Sue's Ruin III, and I hope Sue doesn't mind the extent to which I am copying her. I do so through respect and appreciate of her skill.
It was a very interesting exercise and I learned a lot. There are certainly things I would do differently the next time I try this style of drawing but I thoroughly enjoyed the process and I will definitely be doing more of these.
7 comments: 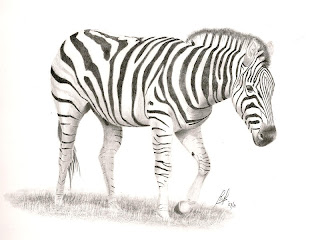 Considering my next drawing/painting I reflected on how much I enjoyed drawing the Leopard with all of his unique markings and tried to think of another animal whose markings made it unique. There are several, but rummaging through some of my old photo's for inspiration I found this chappy.


Some years ago my family and I were driving slowly around the Woburn Safari Park here in the UK when a small herd of Zebra strolled aimlessly in front of us. It was a great photo opportunity. Zebra's are very social animals spending all their time in herds and they live in small family groups much as we do. Each animal's stripes are as distinctive as fingerprints, and no two zebra's are exactly alike. I'd like to think even this one's own mother would recognise him. LOL.