The Good, the Bad and the Ugly. 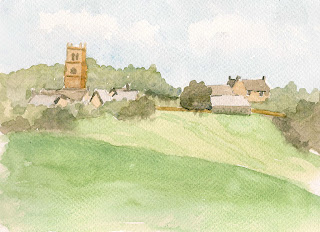 A few days ago I went out for a walk and followed a path that cut through a couple of nearby housing estates before eventually leading out into the countryside along the edge of a Wheat field. After about half an hour I found myself on top of a hill with a lovely view of the next village. I set up my stuff and proceeded to paint. I struggled mixing colours and felt as if I was slapping paint around in a haphazard fashion, so much so that after about 40 minutes I gave up. This wasn't what I'd expected after my last, more successful endeavour ... and the church tower looking more like the Leaning Tower of Pisa didn't help in the slightest. 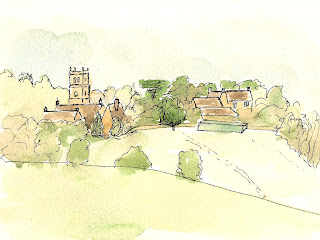 Disappointed in my painting effort but determined to become more proficient painting en plein air I decided to try again. This time I started with a pen on the assumption that the black pen lines would hold the painting together. I found myself moving the pen around quickly and the result was much more sketchy than I'd intended, but I liked it better than the first and so I headed home. 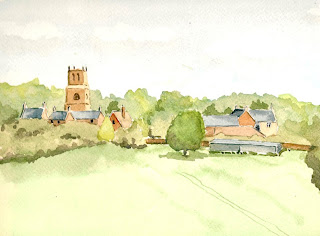 Later in the day, still feeling disappointed that my first effort hadn't turned out as intended, I downloaded to my computer a reference photo I'd taken of the scene, and set up my easel. This time I felt much more in control. I was happier mixing the colours, and was taking greater care with my brush thinking more about lights and darks. I felt that this painting was working and my earlier disappointments soon started to fade.

This is the first time I've painted the same scene both indoors and out and it has proved a valuable lesson. I've learned that I must not expect 'studio' level results when painting in the field, yet I must somehow try and approach a painting outdoors in the same way as I do when I'm at my easel.