Jack of all trades …

My last several pieces have been in pencil and so I was keen to get back to watercolours. Apart from anything else, I have just treated myself to a new desk easel and 5 new Windsor & Newton Sceptre Gold brushes. But I am somewhat disappointed … not in the new brushes but my own ability. 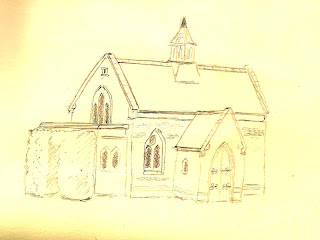 Recently I found myself waiting for my wife as she attended a funeral and I couldn’t help but kill time (excuse the pun) by sketching the quaint little chapel. The sketch had to be done standing under the shelter of a tree as the wind brought in the beginnings of a shower. (That’s my excuse and I’m sticking to it). 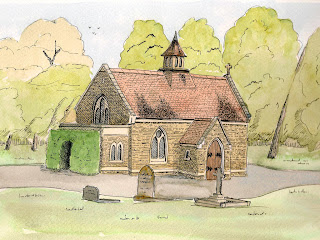 Later, at home, I decided to paint the chapel in watercolours. Fortunately I had taken a couple of reference photo’s which I was very pleased about as my sketch really wasn’t good enough to work from. But the resulting painting was not good. Much too wishy-washy, flat and under-defined. I managed to ‘rescue’ it, to some extent, by using a pen which at least brought in some definition and lifted the flatness … a little. 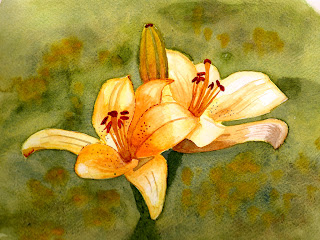 Another day I decided to paint a Lily from a recent photograph I’d taken. I wanted to make an indistinct background so thought I’d do some wet-in-wet. That soon turned into a mess. I lifted the background off and then reapplied it once the paper was dry, but only managed to achieve the same muddy mess as previously. I considered returning my brushes as “not fit for purpose” but thought better of it. lol. These recent, but not uncommon, struggles with the medium are very frustrating and it has me wondering whether I would be better off concentrating on one medium. Many of my blogging friends seem to work regularly in the same style and medium whereas I am frequently switching back and forth … and that can’t help. You know what they say … “Jack of all trades, master of none”. Ok … so I’m making excuses … I’m off to create a masterpiece … in my dreams. LOL.

Not just a flag.

As we all know, this weekend marks the Diamond Jubilee of the reign of our Queen, Elizabeth II. I'm not sure why we are celebrating THIS weekend as she acceded to the throne on 6th February 1952 and was crowned on 2nd June 1953. Hmmm, I'll have to go and do some research. lol.

My own contribution to the public celebrations going on this weekend is very small .... I have erected my Union Jack outside my front door. But that in itself is a very special thing to do. 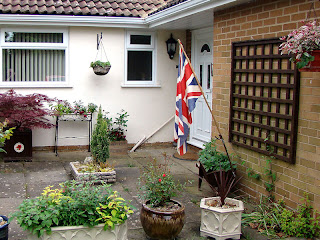 My father-in-law was a very proud and principled man. He served his time during World War II as one of the Desert Rats fighting Rommel. He wore a handle-bar moustache more associated with the Air Force; stood upright; walked with his chest out and stomach in; and was a stickler for time. "Time is time boy!!" he would say. I had a great deal of respect for him and was very sad when we lost him after a very long illness in the early 80's. He was the epitammy of Britishness and would have been as proud as anyone this weekend.

In 1953, in readiness for the young Queens coronation, my father-in-law obtained two Union Jack flags on short poles. He marked that occasion, and many other events since, by hanging his flags out of his bedroom window. One of his flags made it's way to me after his death, and I treasure it. It is old, worn, grubby and to frail to withstand washing, let alone hanging outside in all weathers. But I can't think of a better thing to help celebrate the Queens Jubilee ......

As a point of interest, on my web site I have a brief explanation as to the origin of the Union Jack for anyone interested.