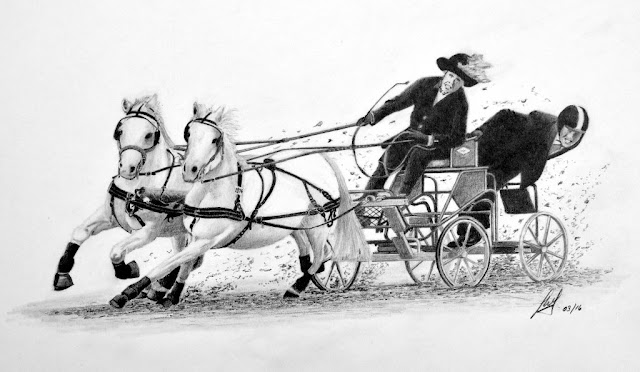 For some time now I've fancied trying to draw something bursting with drama and action but finding a suitable subject hasn't been easy. A few weeks ago I had the idea of Horse & Carriage racing having seen a photo of Prince Philip doing just that. Searching the web I discovered the Facebook page of photographer Paul Orchard whose wife Chris Orchard races scurry's. Paul's site is oozing with fabulous photo's of this action-packed sport and one photo jumped out at me. Dropping him an enquiring line I was delighted when he replied saying I could use his photo as a reference.

The picture is of Chris Orchard (driver) and Charlotte Kenyon (counter balance) and the scurry is being pulled by ponies "Rough and Tumble". The event was the Horse of the Year Show  at the NEC in October 2015.
15 comments: