As I sat watching television a few evenings ago I drew this Robin in my sketchbook using Pen & Ink. I wanted to see if I could demonstrate it was a Robin just by tonal values alone. There is hardly any difference between the tonal values of his red breast and his brown feathers when viewed in greyscale so I tried to exaggerate the tones in my drawing but it didn't work too well.

Dissatisfied with the result and thinking he didn't really look like a Robin I decided to add some colour using coloured pencils. I liked this effect very much and I think that is probably because the ink drawing was a finished piece in it's own right, rather than just the preliminary stage of something more. This became more apparent when I drew the Chaffinch and Blue Tit. They don't work as well, in my opinion, because they have much less ink detail which is probably because I was well aware at the ink stage that colour was too follow. 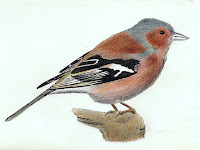 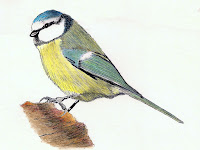 I liked the effect of the Ink with Coloured Pencil so much that I went back to a couple of previous pen drawings and added colour to them in the same way. Though I always like them in their original ink form (yes, I actually said "I liked them" lol) I have to say that I like them even more with the added colour. Oh, I didn't risk ruining the original pen drawings as I printed them out and worked on the copies. This is definitely a mixed media that I will work with again. 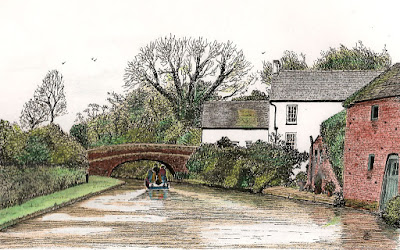 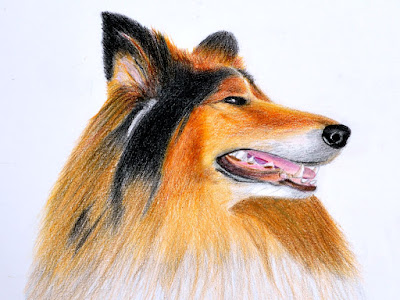 No, not a big brown grizzly from the deep, dark, dangerous recesses of Whipsnade Zoo but my sisters Long-Haired Collie dog called "Bear".

Though I've tried using coloured pencils before I really haven't managed very well with them. My main problem has been blending and I suspect that is because I expected colours to mix as they do with watercolours, and the pencil strokes to smooth out as they do with graphite. Of course, neither is true. A short while ago I decided to have another go with coloured pencils and chose an old photo of "Bear" as my subject. This time I feel the penny dropped with regards to the blending and mixing and I achieved a result I'm not displeased with.

The picture is now framed and has been handed over to my sister who seems to be delighted with it. A good result all round. ;-)
12 comments: 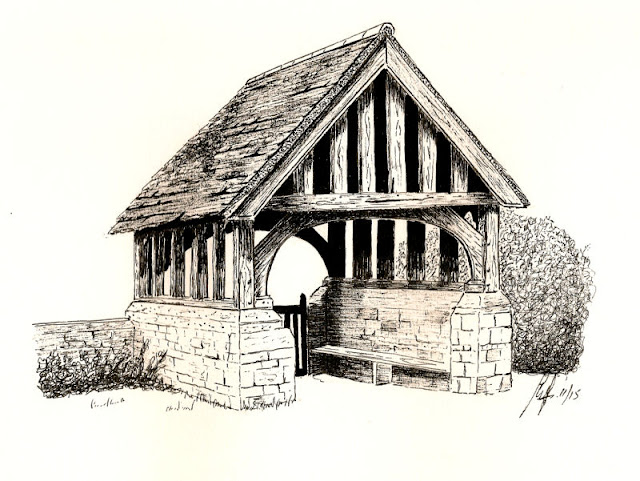 In an attempt to further reduce the tightness in my work I set myself a limited time to attempt this pen drawing of a Lychgate. Though I'm pleased with much of the pen work, especially the shadows and textures, my hasty sketching has resulted in some poor perspectives. It's clear that even a relaxed and loose style still needs attention to detail at the outline stage. Relaxed and loose must never mean careless .... another lesson learned.

For those interested, the word 'lych' is an old English word meaning 'corpse'. In the middle ages, when bodies were often only wrapped in shrouds, the corpse would be placed on a bier (a flat-framed stand) under the lychgate from where the priest would conduct the first part of the funeral ceremony. It's interesting that these small structures with such a unhappy function should these days often prove to be a popular backdrop for wedding photo's. This particular lychgate stands at the entrance to the church I was married in some 43 years ago and most of our wedding photo's were taken in front of it.

Like many of you, when I'm out and about I take photo's of scenes and objects that I would like to paint or draw one day. I took this photo in 2004 for that very reason, which just goes to prove that I get there eventually. ;-)
14 comments: