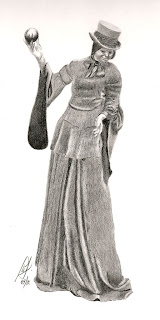 Here is a drawing I did for a bit of fun. I took it from a photograph sent to me by a good friend who saw this street performer at the Edinburgh Festival. The performer was dressed all in grey, including grey make-up on her face, and it was that monochrome appearance that appealed to me from a drawing point of view. The shape of this lady was entirely defined by shadows, highlights and textures.

We are not certain, but we believe the street performer was portraying "The Grey Lady" who haunts the family chapel at Glamis Castle. She is said to be the spirit of Lady Janet Douglas who was burned at the stake as a witch on Castle Hill, Edinburgh in 1537. She was accused of plotting to poison the King but the charges were likely fabricated for political reasons. Allegedly, the ghost has been seen quite recently by a number of witnesses.

I'm not entirely convinced by this as the period dress doesn't really suggest 16th century to me, but since it's only a bit of fun, it's as good an explanation as any other.