The good weather coupled with getting caught up with a few things, has allowed me to get out for another walk and some more plein air sketching. This time I went to some local lakes popular with the local angling community. The walk took me through woodland, along open paths alongside the lakes, past fields of hay so tall it must surely be ready for cropping, and past many families of ducks clearly not impressed at my ambling through their territory. 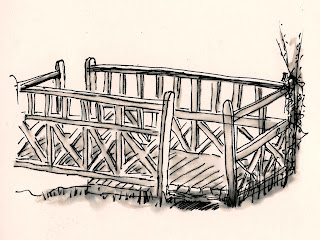 The walk also took me over some small wooden footbridges. One was made of sawn timbers but was surprisingly ornate in it's construction and looked almost out of place out in the middle of an overgrown woodland track. It had seen better days and many of the floor boards were showing signs of rot and I wonder how long it will be before someone puts their foot through it. I was intrigued by is diagonal design, stepping onto it from the side, and off from the opposite side. 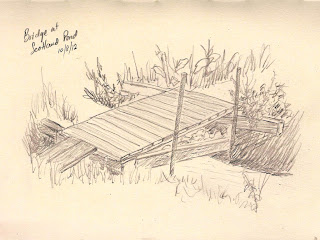 Others bridges were less fussy and were nothing more than a few planks nailed together without any form of hand rail. They looked barely capable of holding a persons weight. It is most concerning because if someone were to fall from the bridge they would find themselves immersed in the fast flowing stream right up to their ankles. But I shouldn't joke. This one in particular crossed a stream that could easily have been stepped over, but the ramp up to it tells me it is there to make the area wheelchair-friendly and hats off to the land owners for making the lakes accessible to all. 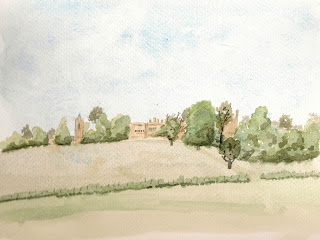 I decided to set up under the shade of some trees looking up the hill towards Castle Ashby Manor and it's church. The manor is a typical 16th century manor house and was seat to the Marquess of Northampton.

From a technical point of view, I really struggle sketching while standing. Both bridges were done this way. I could have set up my stool but I wanted to try again while standing as it's definitely something I'm going to have to work at. I found the painting easier than last time. Not that I did any better but I felt a little more at ease and a little more in control of what I was doing. I do find it hard to concentrate on colour mixing and tonal values while out 'in the field', but I had a general feeling of 'doing better'. While sketching the ornate bridge a couple appeared out of the woods and made their way across the bridge. I stood my ground and carried on sketching ... and that is progress indeed.