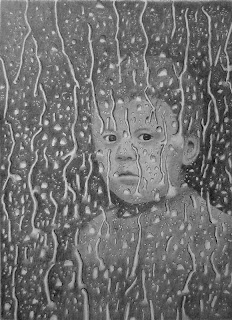 Following on from the comments in the last post, I decided to do some more to the drawing. Firstly, I darkened the background to push it back as suggested by Sue. To make sure I kept the boy behind the glass I did as Pat suggested and darkened the edges of the raindrops. I also darkened the lower part of the boys shirt to make it look less even and I've done a little work with the hair.

The changes have significantly increased the contrast of the drawing and given the whole thing much more depth. I don't know if it is something I see because I want to, but I also feel the drawing now has more atmosphere and mood.

Thanks to everyone who commented previously but especially Sue and Pat.
27 comments:

As I mentioned in my last post, our annual Art in the Park exhibition is starting soon and Entries have to be submitted by Friday. I also mentioned that I had an idea of what to do but that it was ambitious (for me). Well, here it is. 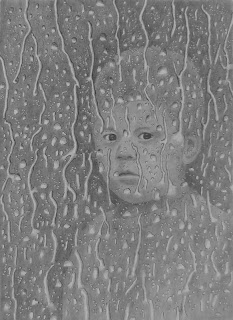 I've called it "Rain stops play" and it's an image I've held in my mind's eye for quite some time, just waiting for an opportunity to have a go at it. I have been working on it for many hours every day for the last 4/5 days. Unusually for me, I haven't had a photo to copy, but I have used a number of photo's of rain for reference. I find with those raindrops that I can keep tweaking and fiddling ad nausium and it's hard to put the pencils away and call it finished.


My main reason for hurrying to get it posted is to invite constructive criticism from my blogger friends, especially those of you who work with pencil. I still have time to make a few adjustments and fine tune the picture. And I'm aware that pencil drawings don't fair too well when up against watercolours and oils so I want to make this as good as I can get it. It's also worth mentioning that I don't consider it to be a very commercial subject matter, so I'm under no illusions with regards to the likelihood of it selling.


Any comments, good or bad, will be very much appreciated. ;-)

More than just a cake

It was a brilliant day for me yesterday .... my last ever day at work. These past few weeks have been frantic and intense as I've tried to cram a couple of months of handover into just a few weeks. My 'team' at work have been the greatest and I'm really proud of them. It's the end of the Payroll year and we had a massive target to reach this week made worse by it being a short week due to Easter. They worked their socks off, especially yesterday while I was out of town at a funeral, and I arrived at work on my last morning to find everything ready and waiting for me to just put the finishing touches to. I was well impressed and told them so.


My colleagues from around the company all chipped in to buy me a really nice  Lead Crystal Whiskey Decanter and 4 glasses. The Silver Nameplate hanging round it's neck simply says "JWJ". Perfect. 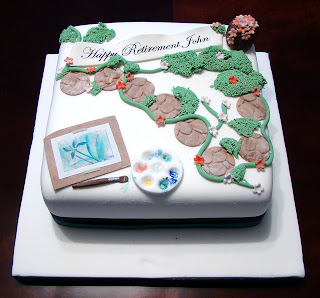 My own department ... my A-team ... bought me a cake. It's not really fair to call it a 'cake' as it's a complete masterpiece. The photo doesn't do it justice. The only thing not edible is the rectangle of paper used for the 'painting'. It has been hand-painted and includes my name in the bottom right corner. I couldn't bring myself to cut it. I know I'll have to, but I want to enjoy it a bit more first.


So now I join the ranks of the great unemployed. I've worked since I was 18 so I have done 46 years and can't have had more than a month off in total over that period. I've been 32 years, exactly half of my life, with this one company which could explain why I feel part of the furniture. Things are going to feel just a little bit strange waking up in the mornings for a while. Still, I have a great deal I want to do ... re-modelling part of the garden; redecorating the lounge, kitchen and main bathroom; reading; sifting through my stamp collection; photography ... but most of all, ART!!!


My next art project needs to be started without delay. It is our annual Art in the Park exhibition soon and my entry needs to be in by next Friday. I have an idea as to what to do, but it's ambitious and I'm far from sure I can do it in the time available. LOL .... and I thought hurrying would be a thing of the past. ;-)
12 comments: