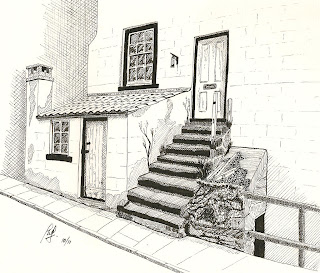 During my recent visit to Robin Hoods Bay I went down into the village itself. Built on the cliffs it was a steep walk down ... and a steeper one back up. It is an artists paradise with a picture lurking around every bend. The narrow high street is of motorway proportions when compared to the narrow alleyways that comprise most of the 'streets' in Robin Hoods Bay. As I ambled along narrow paths that led up and down steps, I was enthralled at the way one persons garden would sit adjacent their neighbours roof and the shapes of some of the cottages is amazing as they were obviously built to fit into the small spaces available. Front doors reached by a flight of well worn stone steps was a common feature. This one was fairly well weathered and close to dilapidation with the black painted woodwork and steps showing the signs of times long gone.

At the time I took the photograph I was thinking this would make a nice watercolour but I have to confess that I'm not doing so well with my painting right now. I keep making mud and struggle to make the paint go where I want it to. At times like this I get frustrated with my art, and I never like to feel that way. Fortunately, I enjoy using pens and pencils so decided to try this one in pen. I'm glad I did because I think the subject lends itself very nicely to the medium .... and I thoroughly enjoyed every second.
9 comments: 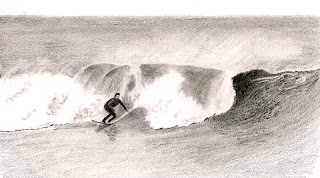 When on holiday last week I took a sequence of photo's of a guy 'riding a wave' on his surf board. Looking through my photo's a short while ago, I was looking at the spray being thrown up from the top of the breaking wave by the wind. I couldn't help but wonder how you'd go about drawing something like that, as you do ... so I just had to have a go. This is only a small sketch (6" x 4") but it served the purpose.
9 comments:

First of all, I must apologise to all you bloggers I follow regularly for not keeping up with your posts. I have been away on holiday and although I had some limited internet capability with me, there was not enough online time to get round the blogs. Anyway, I'm back now and I'll be catching up just as quickly as I can.

It had been my intention to do lots of drawing and painting especially to push myself to do some more plein aire work. Regrettably, it was so damp and windy that sitting outside for any length of time was not enjoyable. However, needs must, and although I didn't do any plein aire painting, I did manage a few quick sketches. The one of Scarborough was sketched looking through the rain splattered windscreen of my car as we sat on the harbour wall beside the Fishery. 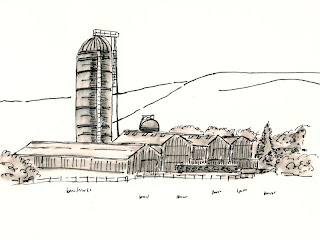 I spent the week near Robin Hoods Bay on the edge of the North Yorkshire Moors. As a 'towney' wanting to appreciate the countryside, I decided to stay on a working farm for the week would be a relaxing experience. That said, there were no animals and I don't know what the buildings and machinery were all about but it looked more like a factory than a farm.

One of the things I'd looked forward to was a trip on the old steam railway. When the day came, it was a disaster. Having parked the car I went to buy the tickets and was very disappointed to be told that the steam engine had broken down so the train was being pulled by a Diesel. That's just NOT the same. Still, I couldn't do the trip on another day so decided to do the trip regardless. After a short wait we were finally in the carriage and pulling out of the station. 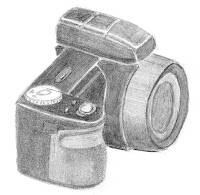 I was looking forward to seeing the best of the moors from the train and had my camera ready but the worsening rain and reducing visibility were making photo's less likely. Suddenly the train screeched to a halt and the guard ran through the carriage looking most concerned. Long story short, the engine had broken down in the middle of nowhere and we had to wait over an hour for another engine to come and tow us on to the next station. That was actually good news as I was already having visions of us all walking along the railway track to the nearest station. Thankfully I had my sketchpad with me and used the time to attempt a drawing of my camera. Eventually we were pulled to a station where we were told no more trains would be running and a bus would take us back to where we started. Cold, damp and disappointed we arrived back at our starting point several hours later.

The highlight of the week was a visit to Robin Hoods Bay itself. The village is built into the cliff face and is a maze of narrow winding alleyway's between the quaint old smugglers cottages. It was fascinating to see how one persons roof was on the same level as another persons garden. An artists paradise as every step I took revealed an ancient doorway, steps worn by centuries of use, crooked windows and cottages built to abnormal shapes in order to fit them in, like 3-dimensional jigsaw pieces. Had I been on my own I would have loved to have sat and sketched all day long but as it was I contented myself with taking scores of photo's. I didn't manage to get as much drawing done as I'd hoped during the week but I have enough reference material to last me a very long time. Can't wait to get started. ;-)
9 comments:

Good for the soul

Some times, for no particular reason, we just can't summon the enthusiasm to paint or draw. We've all experienced it. Some call it 'artists block' and others just that they aren't in the mood. Some times lifes little problems come along and knock us off track. Some of us are more resilient than others but we all have a point beyond which the pursuit of our art seems trivial and unimportant by comparison. This is where I am right now. 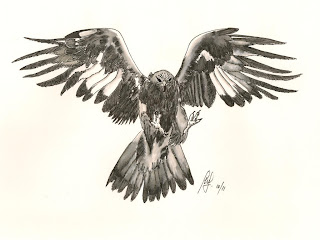 However, fearful that my 'mood' would only deepen the longer I allowed it to, I made the decision to spend a short while doing something arty even though my heart and mind just wasn't in it. Not wanting to think a great deal, nor get involved with setting up my stuff or looking for something to paint, I opted for the simplest, quickest solution and the medium I am most comfortable with. I picked up my sketchbook and a water soluble pen and took down from the wall a Wildlife calendar that had been sent to me last Xmas by my good friend Ingrid (Ochil Art). I sketched what I saw before me without any thought as to whether I would apply water later or just abandon it when I'd had enough. As I forced my pen to sketch shapes on the paper I felt more at ease with what I was doing and I started to get more absorbed by the art rather than other things.

The end result is far from a masterpiece (classic understatement) and some of the dark areas are too dark because I didn't give enough thought to how much ink to lay down to give me the right tone, but none of that matters. A little over an hour after I'd started, I put my pen down feeling more satisfied and relaxed than I had for many days ... and keener than ever to pick it up again.
9 comments: