Last summer we visited Torbay, the English Riviera. While there we went to Babbacombe and took the old Victorian Railway down the cliff face to the sandy beach of Babbacombe Bay. The railway was a wonderful experience. It is a pair of Victorian carriages joined by a cable such that when one is at the bottom, the other is at the top. The contraption is water powered and simply by filling tanks in the top carriage with water, while emptying those of the bottom carriage, one goes down as the other comes up. 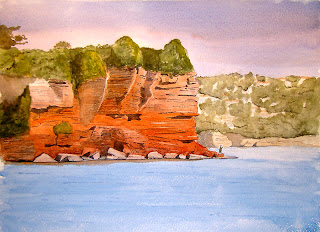 When down on the beach we hired a couple of deckchairs and tucked into the picnic we had taken with us. The sand was soft, the sun was hot, the sky was blue and the sea was calm. Looking across the bay the tall, bright red sandstone cliffs of Babbacombe stood proud over the landscape, and the distant shore was littered with white houses bearing terracotta coloured roofs making it plain to see why the region is known as the English Rivierra.
3 comments:

What are the chances?

Unbelievable? I would have thought so had I not seen it with my own eyes. This photograph is not contrived in any way. I was clearing fallen leaves in my garden yesterday when I spotted this one 'skewered' onto a spikey leaf on my Cordyline Australis. I can't imagine the odds of a leaf falling in just the right way for this to happen. Just had to share.
1 comment:

Barn in a field 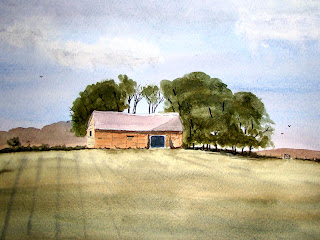 For my birthday last month my wife bought me a book by James Fletcher-Watson. I love his work but sadly his books are no longer in print. However, my wife managed to get me a good condition second hand book off the 'net, so I'm in heaven.

I've only read a few pages of the book so far, but this very quick painting of a barn in a field was copied from his book to give me a feel for how this great artist approached his work. Mine is nothing like his (lol) but I know I'm going to learn a great deal from him.
5 comments: 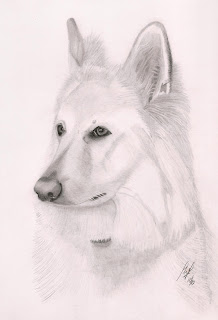 Well here is my second attempt at drawing the white German Shepherd. This time I decided on a head and shoulders portrait as there are more tones around her ears and muzzle. I was desperate not to have to shade in a dark background in order to make her look white and I think I've achieved that to some extent, though there are some parts of her that I'm less pleased with. She's a very 'fluffy' dog and I found it difficult trying to capture the softness of her fur.

I again used Bristol Board and I have mixed views of it. It is heavy and very smooth, which makes it tollerant of the eraser, but it lacks 'tooth' which results in very pale tones. The jury is still out as far as I'm concerned and I'll reserve judgement until I've used it some more. The light tones could just be me trying hard to keep the subject white.

PS - I've just visited Crystal's site and looked at her Labrador on Bristol Board. Can't fault the medium there - it's wonderful.
8 comments:

One that went wrong

Both my blog and my web site are aimed at beginners. Not because I think I can teach anyone anything when it comes to art, but because most beginners need a lot of encouragement. Beginners get things wrong and that can be soul destroying. I suspect many beginners have given up before they've even started, just because that first effort turned out poorly and they decided they weren't capable. I like to show beginners that it's ok for things to go haywire and that no picture is a bad picture, as long as we learn from it. 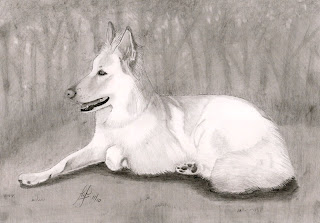 In that vein, here's one that went badly wrong. It is a graphite drawing of a white German Shepherd and so I decided a grey background was necessary to help the subject stand out on the paper. I decided to use Bristol Board for the first time. I'm not the bad workman blaming his tools and I make no excuse for the quality of the drawing, but for some reason I did have a lot of trouble shading the background and I just couldn't achieve the smooth, even tone that I was trying for. All of my horizontal pencil lines were clearly visible, so I decided to go over again with vertical strokes. These were also visible so I went over again with diagonals. The more I did, the worse it became, and in the end looked like the scribbled mess that 4-year olds produce (with apologies to 4-year old's).

Having decided the picture was ruined I consoled myself with a 15-year old malt. I pondered on my drawing and decided that rather than discard it I would think about how it might be salvaged in some way. Rubbing out the background didn't work as I couldn't get a clean enough canvas, so I decided to add 'scribble' on top of 'scribble' to create the impression of field and trees.

The end result is still awful, but it is better than it was. It's not good enough to give to the dog's owner so I shall start over and try and get it right next time. I learned as much about drawing, pencils and Bristol Board during the rescue process as I did before it all went pear-shaped. So my message to beginners is don't be afraid to attempt a 'rescue' when things go wrong; even if it can't be salvaged, find a way of finishing it off that adds to your drawing/painting experience; and don't be ashamed to show your effort to others, nor afraid of the feedback that may come as a result.

Now it's back to the drawing board to start over ... although I may attempt a head & shoulders portrait this time.
2 comments:

Sun setting in the Lakes 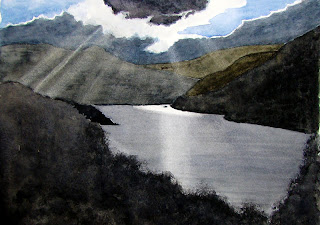 This painting is taken from a photograph I took in the Lake District a couple of years ago. It was autumn and we'd been for a drive through the lanes and passes that weave around the hills and mountains. Towards the end of the afternoon, just as the light was beginning to fade, I rounded a corner to see the most spectacular of views. Most of the landscape was in near silhouette and the sun was hidden behind a cloud, but it had powerful beams of light shining down on Buttermere Lake creating a breathtaking vision. Luckily I saw somewhere to pull over and jumped from my car with camera in hand. The water was still, there was no breeze, there was no sound. I took my photo and within minutes the vision had gone.
5 comments: