This is great fun, but probably the most challenging project that we run in the art forum. One of our members posts a photograph of an object, scene, view and then the rest of us try and paint it. All of the paintings are emailed to me and I display them side-by-side on a web page at the end of the month. We then all get to see how everyone else tackled the subject, appreciating the area's where others did better than us, and where we did better than others.

It's very important to appreciate that I insist on a non-competetive atmosphere in the forum. By this, I don't mean people aren't interested in doing the very best they can, I mean that we don't set out to try and do better than each other. At the end of every month, no one says "Oh, his is the best" or "So-and-so's is worst". It's not about 'competing', it's about self-appraisal. As a result, even the most inexperienced beginner does not feel awkward or inferior if their painting isn't as good as some of the others - they learn from it, and that is the purpose. In addition, even the more experienced painters will find themselves faced with a subject they'd never considered attempting previously. It takes them out of their comfort zone and presents them with a new challenge.

We have held 7 such monthly projects now, and every one has been greeted by a myriad of groans along the lines of "Oh my goodness - we'll never paint that!". At the end of the month there are just as many surprised voices saying "Wow - that was great - I'm really pleased with my effort".

In respect for those members who may appreciate a little bit of anonymity I'm not posting a link here, but anyone who wants to see for themselves what a great project this is, is very welcome to register in the forum.
No comments:

Anyone who has read my blog previously will be aware that I run an Art Forum, and that the great bunch of members there love to find new and interesting ways of making their art fun. For quite some time now, we have had a Monthly Painting Project, in which we all paint the same photograph and then display them all together at the end of the month and compare notes.

The most recent project we have tried is one that we have decided to call 'Picture Puzzle'. An existing painting is disected into squares (not literally) and the squares are distributed to the members, each member then painting his or her square. As the squares are painted, so they are added back into a grid, gradually rebuilding the original painting. The first one we did is shown a few posts down. Here is the picture for our second one. Why not come back from time to time and watch it gradually taking shape.
No comments:

On 5th October 2007 I ordered a See, Speak, Surf package from Sky. What a mistake that was! I promptly paid the appropriate charges (£129) in good faith and on October 9th an engineer arrived on site to install the dish and related equipment. After some considerable time of wandering around outside looking thoughtful, he finally announced that I cannot receive a Sky signal at my home. The explanation, if you can believe it, is that there is a tree in the way. Duh!! Both of my neighbours are in the shadow of the same tree, but they can get Sky alright. It's the 21st century and we carry mobile phones that will do just about everything except brew a cup of tea ... but we can't get a Sky signal through a tree. It beggars belief.

Anyway, this rant isn't about the fact that I can't get a Sky signal. It's about the fact that I can't get my money back. The engineer put in motion the appropriate cancellation procedures telling me that it would take 10/14 days. A call from someone in 'administration' then confirmed that. By October 31st I still hadn't received a refund and so spoke to Sky. They admitted a mistake had been made and assurred me the refund would be dealt with promptly and that I would have my money within 5/7 days. I checked my account regularly but by November 9th decided that I'd been more than patient, so called Sky again. Again, I was told another mistake had been made but the operator on the phone took immediate steps to action my refund as we spoke. I was told it would take 48 hours to hit my account. On November 13th (today) I conclude that I'm being taken for a mug and so phoned Sky yet again. Guess what? They are processing my refund but it will take 14/21 days. DUH? Like, what banking service takes 2/3 WEEKS to move cash?

Furiously I demanded to speak with a Supervisor but he only fobbed me off the same way his underling had done. I did manage to get a postal address I can write to, but they refused point blank to provide me with a telephone number OR to take any action that might speed up my refund. What they did provide me with, after much arguing, was a fax number. I was told it was "Extension 115 and then key 77694". I asked what the full STD number was but was assurred I only needed to key "115 then 77694". I tried to explain that a number like that just won't work in the UK, but was assurred this is the number that is always given out to customers "... and nobody's complained yet".

So, the warning is simple. If you live near a tree don't waste your time ordering Sky. If you DO order Sky and the installation can't be completed for whatever reason, DO NOT believe them when they say the refund will only take 7 days. I can't imagine how much this has cost me in phone calls and hassle. Thankfully, in these days of low interest rates, loss of interest on my savings isn't a major issue .... but there is still the principle to consider. Sky DO NOT take 14/21 days to bank your hard earned cash. They DO take 6 weeks (so far) to return it.
1 comment: 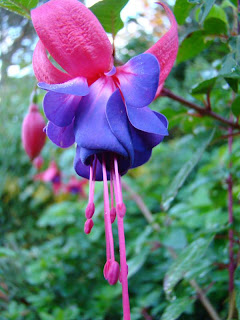 I haven't had huge amounts of time for playing with my new camera, but I have managed to try out most of its functions. One of the things I've been looking forward to the most is the ability to take good macro photo's, especially of my Fuchsia collection. This one is Fuchsia 'Margaret'. Most Fuchsia's are looking very poor this time of the year but this one is as hardy as they come, as you can see. I'm really looking forward to next summer when I shall be able to photograph all the different varieties, and am seriously thinking of creating a "Fuchsia Album" on my web site. Whether it's the mild weather or not I have no idea, but our Christmas Cactus has been in flower for a few weeks already. I couldn't resist the temptation to get in close and personal with my camera. This was indoor, under artificial lighting, and I confess to many attempts before I achieved what I was after.
No comments:

It was late evening, two days before my birthday. The sound of the doorbell was unusual at this time of night so it was with some apprehension that I opened the door. To my amazement, standing there with his camera pointed in my face, was a good friend from Australia. Thankfully, his camera was on my side and refused to fire ... phew! That marked the beginning of a fabulous weekend. I steered a canal boat along the Grand Union Canal and had a wonderful birthday in the company of my family and friends. I shouldn't really single out special gifts but there are three I'd like to mention, aside from the day on the canal which was truly magnificent. My wife, daughter and her partner, bought me a Sony DSC-H9 camera (which I've previously mentioned). They also gave me a fantastic Remote Control Helicopter. This is not a toy but a proper model, and I'm having masses of fun trying to learn how to fly it. The third gift I want to mention is a painting. It is of Eilean Donan Castle and was painted just for me by a very special friend. With her permission, it gives me great delight to display it here. This is one of those places I just have to visit for myself one of these days. In the meantime, I can look into my new painting and imagine myself strolling across that ancient bridge or sitting on the bank of the loch. Wonderful.

I finally managed to get rid of my Australian buddy once the weekend was over ... but he came back a week later for a second visit. I couldn't work out if he simply appreciated my company or if the free bed and board had something to do with it. ;)
1 comment: