In the nearby village of Earls Barton is a very nice church, and it is the sort of thing I like to take Photo's of. Recently, while looking at some photo's, I noticed what looked like a door halfway up the tower close to the clock. I wondered if it was there to provide access to the clock, but that made no sense. Then I thought that maybe it wasn't a door but a shuttered window of sorts ... but it looks like a door. Intrigued, I made some enquiries and what I discovered is quite interesting. 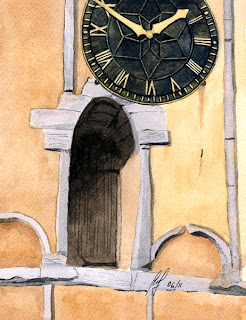 This church is famous for its mixture of architectures dating back to c970 a.d. Apparently, it started life as nothing more than a keep (tower) and it was used as a place of refuge by local peasants to escape marauding bands of Vikings who sailed down the River Nene. At times of danger, the locals would climb a ladder to the keep and then pull the ladder up behind them. There was a small church close to the tower and many successive modifications to the church eventually brought the two buildings together. At one time, the local priest was known to give his sermons from the doorway to his congregation below. Architecture from every century from the tenth onwards is represented in the fabric of the church.

I understand that the door we can see today is the original door and now I know why it's there it no longer seems so pointless. Any one who likes to look at old buildings, especially churches, should put this one on their 'must see' list.