More than just a Planter

I'm very fortunate to still have both of my parents. They are getting on in years now - mum is 86 and dad is 93. They still look after themselves very well and only need me to drop in on them a couple of times a week. They celebrated their 65th Wedding Anniversary yesterday and I arranged another card from the Queen, which made them very happy.

My Dad has always enjoyed woodwork. He doesn't do the proper stuff ... joints, mortice and tenons, etc ... and tends to 'knock' things together with a hammer and nails. But his leaky shed at the bottom of his garden is his sanctuary and he spends hours and hours knocking out bird tables and nesting boxes. A while ago he was saying he wished he could do something else, but didn't know what. 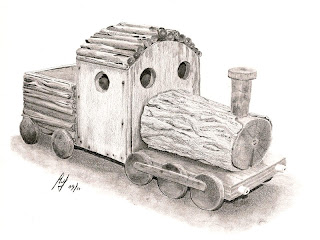 I was pruning a tree shortly after and had an idea. I took him some branches of varying thicknesses and asked him to make me a Planter that I could put a few of my fuchsia's into. He looked puzzled but said he'd give it some thought. A week later, this is what he presented me with. It is about 18" long and 5" wide, and the 'coal tender' behind the 'drivers cab' is the perfect size for a plant pot. It has sat proudly on my patio since that day. It is looking weathered now, which adds to it's character, and many of the twigs are losing their bark. But it is a treasured possession and will always be so much more than just a Planter.
11 comments:

The Holy Island of Lindisfarne is one place I've always wanted to visit. It is too far North for me to do it in a day trip so I need to take advantage of being in that area. Despite a holiday many years ago in the North Yorkshire Moors and another some time later in the Durham region, both within and hour or two of the Island, I haven't managed to get there. The nearest I managed was in 2007 as we were travelling back from a weeks holiday in Scotland. We passed within 20-30 minutes of Lindisfarne, but there wasn't enough time to make a worthwhile detour. So the island remains one of those places I just long to visit.

Lindisfarne Castle sits on top of a volcanic mound known as Beblowe Craig. The castle was built in the 1550's following the dissolution of the monastries by Henry VIII, in defence of the realm against attack by Scotland and in pursuit of their Spanish allies. The island is reached via a tidal causeway that is completely submerged when the tide comes in. I think the boyish sense of adventure of being in the castle when the tide comes in, totally cut off from the mainland, is one of the attractions for me.

Ingrid provided a photograph of the castle for my Art Forum's latest Painting Project, and this is my effort. It's been a while since I last had time for a painting and I thoroughly enjoyed this one.
9 comments: