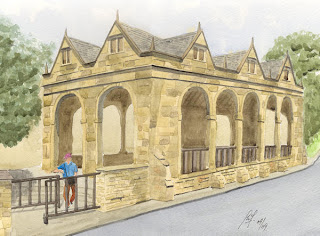 Built in 1623, this Market Hall caught my attention on a recent visit to the Cotswolds. All of the buildings in Chipping Campden, and other towns in this area, are constructed of this yellowish, locally quarred, limestone.
No comments: 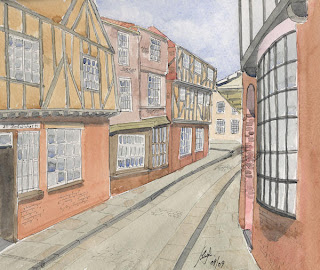 This is a pen & wash of The Shambles in the City of York. For any who don't know, this is a well-preserved medieval street of timber houses. Though I'm very pleased with the end result the painting hasn't turned out as I'd wanted. What I had intended from the outset was to draw the scene with a pen and then add only a minimal amount of colour, leaving the pen lines to do the 'talking'. Regrettably, as is so often the case, I didn't know when to stop and I've applied a lot more colour than I'd ever intended. I wouldn't have thought it would be so hard to NOT paint up to the lines and to leave some white spaces here and there. I also think the picture lacks a focal point. 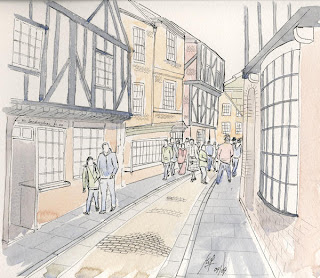 So, I had a second go at this scene. The first thing I decided was to draw in the people jostling past the shop windows. This helped with the focal point issue. The other thing I did was force myself to use weaker colours and put my brush down once I'd laid in some washes. This still isn't the 'minimal colour' effect I was aiming for, but it's much closer.

I would really welcome any comments with regards to which version works best.
5 comments: 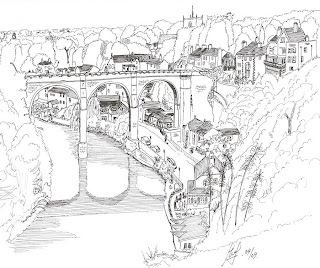 In the Autumn of 2008 my wife and I holidayed in Yorkshire, not far from the market town of Knaresborough. The town is situated on a cliff top overlooking the River Nidd. The cliff makes a fine natural defence and so it was a logical choice to build a castle. The castle has largely gone now but it's remnants are well displayed in a perfectly manicured park area that overlooks the river valley. The view from the park towards the railway viaduct with it's fine arches bridging the valley, is quite breathtaking.

This pen study will never do justice to the beautiful view, but it was fun to do. I find the challenge of going straight in with the pen (no pencil guidelines first) very rewarding.
2 comments: