In September 2001, just days after the horrors of 9/11, I flew out to America to spend a week in a log cabin with an e-friend I'd never met before. Our holiday was one of trecking through the woodlands of West Virginia and, as a momento of our holiday, my friend gave me a rather marvelous walking stick. It was carved and painted by a traveller who passes through the area from time-to-time.

On the day of my flight home I was concerned as to whether my stick would be allowed on the plane. The recent events had made the authorities review the whole situation with regards to luggage. Fortunately, all was well and my stick and I parted company as it headed for the cargo hold and I headed to the lounge bar.

After I'd landed at Gatwick and made my way to the Luggage Collection point I was thrilled to see my stick rolling around between some suitcases as the carousel bought it ever nearer. There seemed like endless delays as I waited for the rest of my luggage but finally I headed towards the station ... a backpack on my back, a suitcase in one hand, and my treasured stick in the other.

It had been a long flight. I hadn't slept much. It was now 4:00am in the morning and I was exhausted. There was no direct link to a rail service that would get me back home so I knew I had to navigate to various stations as I made my way homeward. I jumped (dragged myself) onto a train heading towards London and found a seat. Soon I was getting off at a station I'd never been to and my next task was to find another train heading my way. I placed my suitcase and stick against the subway wall, and removed my backpack to find my map. After several minutes studying it, I put my backpack on, collected my suitcase and headed off in search of the trains.

My ramblings along the Subway tunnels took me past many platforms, but none that really helped. It was getting busier now and there were more and more people in the subways, though they seemed to know where they were going. Suddenly, I found myself outside. I did the only thing I could and headed back into the labyrinth. It seemed hopeless as I wandered back and forth, unable to find an official I could ask ... no ticket office, no platform attendant. I was so tired now and really couldn't imagine myself walking for much longer. I needed that train.

As I moved along the subway with more and more people around me, my eye was caught by a stick that someone had obviously left propped against the wall. As I neared, I realised it was painted ... and hand-carved. Strewth!!! It was MY stick. This must have been the place that I checked out my map about half-an-hour ago.

I picked up my stick in a state of amazement that it was still here and hadn't been purloined by a passer-by. The very next platform I came to was the one I needed and, after a short wait, I was soon sitting on a train. A couple more changes, a few more hours, and by 9:00am my wife was collecting me from my local station.

It was probably just my tiredness that caused me to head off in the wrong direction without my stick, but was it? If I had turned the other way, and found my train immediately, where would my stick be now? Did I get 'lost' for a reason ... or was I just very lucky that the subway that morning was full of honest people? Whatever forces were at work that morning, I am so very glad that me and my stick were reunited. I shall treasure it always.
1 comment: 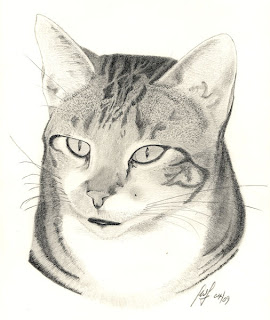 No, not the 60's hero of that great TV Western 'Gunsmoke', but the name of this Tabby cat.

Matt Dillon belongs to .... correction ... a good friend of mine belongs to Matt Dillon. One day, Matt wandered up to my friends home and decided he liked it. We have no idea where he hung out before that and assume he may have been living rough in a semi-wild state. Whatever his past was, he soon adopted my friend and has made her home, his home. He has already shown the local hound who the boss is. When she was telling me the story a few weeks ago, I couldn't resist the urge to draw him and she kindly sent me a photo to work from.
No comments: