Not long to go.

I've learned that the average incubation period for Pigeons is in the order of 17/18 days. I have no idea how old the egss were when I first discoveed them but that was 10 days ago. I have to assume that they will hatch any day now and certainly within the week.

Whichever of the two Pigeons is sitting on the eggs (because I believe the two partners share the role), the other is never far away and being extremely vigilant.
A few yards from the Laburnum tree that holds the nest is a huge Pine tree that commands a masterful view of the surrounding area. The non-sitting partner can usually be seen there, standing guard .... day and night. 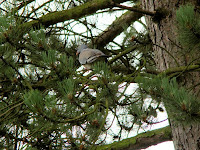 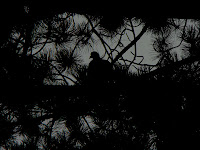 A few days ago, on 16th August, I tackled cutting down a 20 foot conifer that has seen better days. Apart from only being green at the top, it was growing up into a Laburnum tree and the whole thing looked a mess. I hadn't cut very much off it when a Wood Pigeon fluttered away with a squawk and much flapping and was obviously in a bit of a hurry. This happened to me once before when I was climbing my parents Rowan tree to do some pruning. On that occassion, I discovered a nest just above my head. I climbed back down immediately and, thankfully, the Pigeon soon returned. So, I looked around carefully and, sure enough there was a nest in the adjacent Laburnum tree just inches from the part of the conifer that I had just cut off. The nest was now much more exposed to the elements than it had been previously and I took seriously the distressed manner in which the Pigeon had flown away. 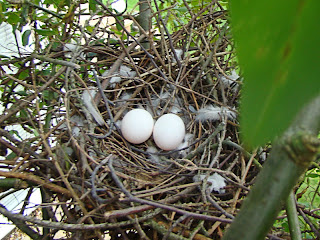 Without wishing to get too close, but also wanting to know what I was now dealing with, I grabbed my camera (which is never very far away), went back up the ladder and held the camera high above my head while I fired off a couple of shots into the nest. Thank goodness for a swivel LCD screen which makes overhead shots a cinch. The resulting photo's showed me what I had feared ... two eggs in the nest. 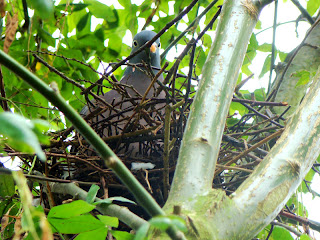 All I could think of was to back away to a safe distance and wait. Thankfully, after a few minutes the Wood Pigeon returned. I pottered around within view but never getting too close as I tried to educate her to the notion that I meant no harm. Once she'd settled on her eggs and I'd given her enough time to get used to the idea of having me 'in the neighbourhood', I carried on with the job of digging out the old tree ... and she seemed quite happy to sit and watch.

Then I had a thought and climbed to the top of another large conifer about 20 feet away. I took my secateurs with me and trimmed away just enough of the foliage to be able to peek through at the nest a few yards away. 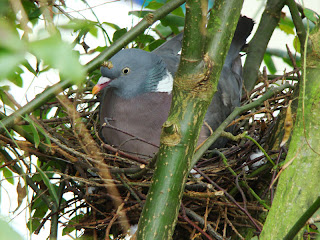 I dare say the Pigeon knew I was there as I'm not the most nimble of climbers, but if she did, she didn't let on. I was thrilled to now have a first rate view down into the nest. I'm far from sure I will be fortunate enough to see the chicks when they hatch, but my vantage point is prepared and I shall climb up there whenever I can to see what's going on. Fingers crossed and watch this space!!!
3 comments: