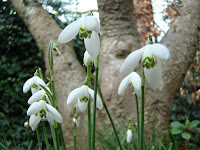 One of the things I love about my garden is the fact that I have something flowering in it every month of the year. It is an easy misconception that gardens are a 'summer' pastime, but nature doesn't stop working just because the season has changed. 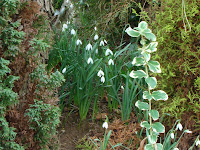 From spring bulbs, through summer flowers, and on into autumn and winter. And don't the birds just love the late flowering spikes of the Mahonia in December. 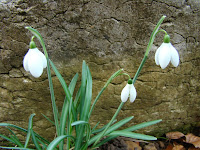 But it all starts in January with the Snowdrops. Small, delicate flowers with the toughness of old boots. I have no idea which specific variety populates my garden, but I suspect it is just a basic common type. (If you know, drop me a line). 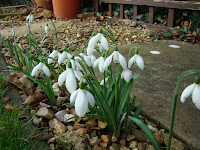 I always see small green shoots breaking through the surface of the ground around Xmas time, and by the first week in January buds are well formed. By mid-month, many are opening and by the last week of the month, they are in much abundance. They will last at least until the middle of February, and sometimes even longer. 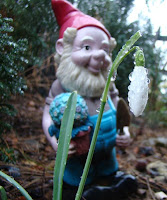 This is where another of my hobbies comes into its own, as I rush off to fetch my camera to make a permanent record of what these little chaps are up to. I said "as tough as old boots" and I'm not exagerating. They grow pretty much anywhere .... in the shade of a large Apple tree, in a small gap between shrubs, in a rocky crevice and even by forcing their way through a gravel pathway. Even my Gnomes can appreciate the early beauty that Snowdrops bring to the winter garden.
4 comments: