It's been a while

I can't believe it's been well over a year since I last posted. It's been a very different year for all of us, that's for sure. Though I've produced the odd picture here and there I've mainly been busy working around the house and garden and messing about with a few of my other hobbies. There have been several things I thought I might share with you but they haven't come under the heading of "Art", in fact, I have been thinking I might expand the scope of my blog to include none-arty stuff but haven't made a decision about that yet.

So why am I posting now? Recently I discovered a large number of my paintings and drawings being displayed on other web sites, and some of them actually being offered for sale. I was appalled and massively surprised by the number of "stolen" images I have out there. I decided to tackle the issue head on and have been having some good success and it occurs to me that anyone who posts their work online might well have the same problem. As a result I began a series of pages on my website explaining about Copyright Infringement, what can be done about it, and how I'm tackling the issue of having the offending images removed from the internet. I will be posting more on the subject soon but in the meantime, if you're concerned about your own work, visit my website. 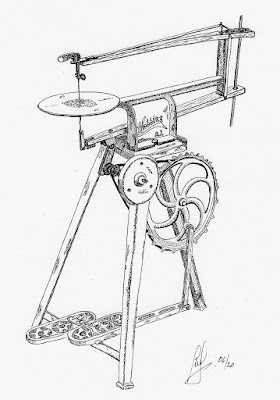 The drawing above is of a mid-20th century Hobbies A.1. Treadle Fret Saw that used to belong to my Dad. More about that in my next post.