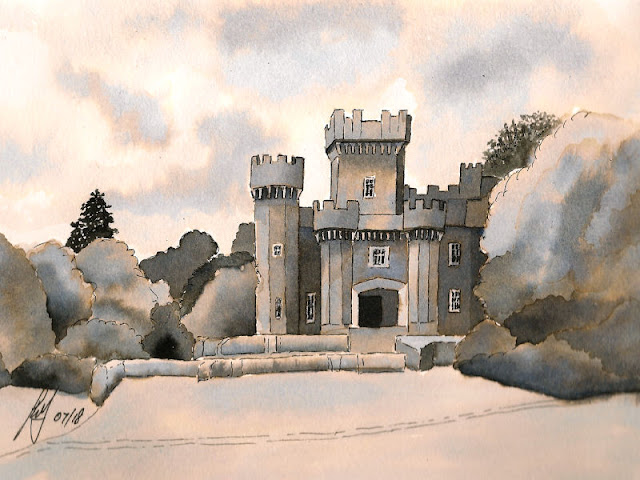 Not an exciting picture and certainly not one of my best, but I had the urge to have another go at painting with Ink washes. I just love the way the ink separates on the paper and I find trying to 'control' that in a meaningful way quite interesting. I chose the subject primarily because of it's mixture of straight hard edges, curvy mid-tones and light fluffy shapes, all of which combine to put the "ink applicator" (me!!) through it's paces.

The object of the session was to 'play with ink' and I'm annoyed that I didn't pay more attention to the initial drawing stage. The straight edges to the hexagonal towers could have been more intelligently handled and some of my verticals are far from it .... vertical. And that lack of care initially has spoiled what might otherwise have been an acceptable painting. Still, the 'play with ink' part of the session worked and I really enjoyed the process even though I don't think I had quite as much 'control' over the ink as I would have liked.