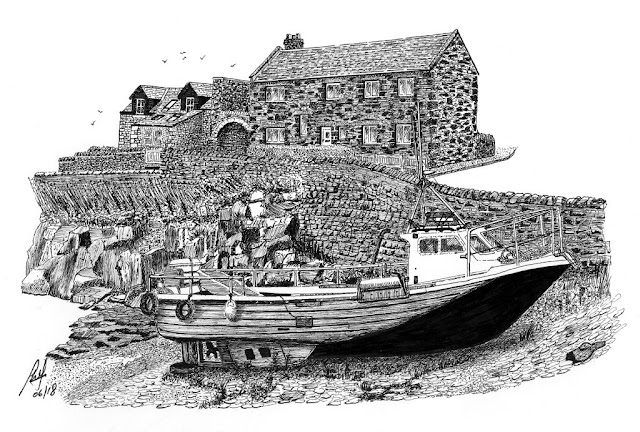 A couple of years ago I was on holiday in Northumberland, a most magnificent part of the country. As well as visiting the more famous locations such as Lindisfarne, also known as Holy Island, and the wealth of stunning castles in the area such as Bamburgh Castle, I searched out some of the small fishing villages on the coast. One of them was this jewel in the crown called Craster.

Craster has a very small harbour and I found only a handful of small boats, mostly beached on the overgrown pebble and shale beach. I spent the most wonderful couple of hours strolling out onto the harbour wall with my camera snapping shots of the boats and seagulls (I just have to take photo's of seagulls in flight - lol) and then sitting on an old wooden bench where my wife and I enjoyed a cold drink and a sandwich. This pen and ink drawing is of the view we had from that bench. I would add that drawing it now has brought it all back much more vividly than simply looking at the photo's again.