Back in 2006 I attempted a double portrait of my 2 dogs. I had owned them at different times, first Sally thoughout the 70's and 80's (she died in 1987) and then Tess from 1987 through to 2003. Sally was a joyful Jack Russell and a lot of fun. She became very protective of my daughter when she was born in '78, so much so that one day, as we were walking through a local woodland, a large Red Setter came lumbering directly towards my daughter who was only toddling at that stage, and Sally sprinted in front of the Setter and threw herself bodily into the large dogs throat. The Setter turned and scurried away.

Tess was a troubled Collie/Whippet cross that we found at a rescue centre. Her heavily pregnant mother had been found abandoned in a ditch and close to death. The mother didn't survive but the rescue centre managed to save Tess and her 6 brothers and sisters before she died. Tess was a seriously traumatised animal who shook with fear whenever a man approached and who curled into a trembling ball at the sound of a chain. Some months after bringing her home we happened to bump into someone who had taken one of Tess's brothers and they reported the exact same traumatised behaviour. Though it took many patient years, Tess eventually put her fears behind her and developed the most gentle caring nature.

But back to the portrait. It was one of my earlier pencil pieces and I hadn't discovered the art of blending, or even proper shading. Still, I was very pleased with what I achieved as the portraits looked like the dogs in question and the framed picture has been hanging in my lounge ever since. However, just lately I've been looking at it and thinking it's really not that good ... or at least, I felt I should have done better. And in the end curiosity got the better of me and I just had to have another go at it.

One of the main objectives of my web site and this blog, is to encourage beginners to have a go, and to enjoy the art journey. And one of the things I always say to beginners is keep all of your work so that you can look back in the future and see how much progress you've made. For that reason I display BOTH of my portraits together. The differences are very noticeable and the message is very clear .... though we may not always feel as if we are making progress, as long as we're drawing or painting, progress IS being made.

Looking back at old work shows us how far we have come, but doing the same picture again is even more revealing .... and even more rewarding. 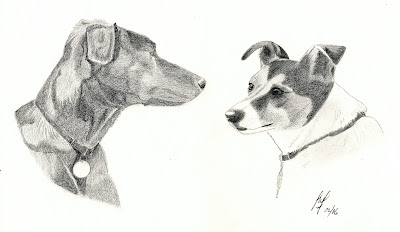 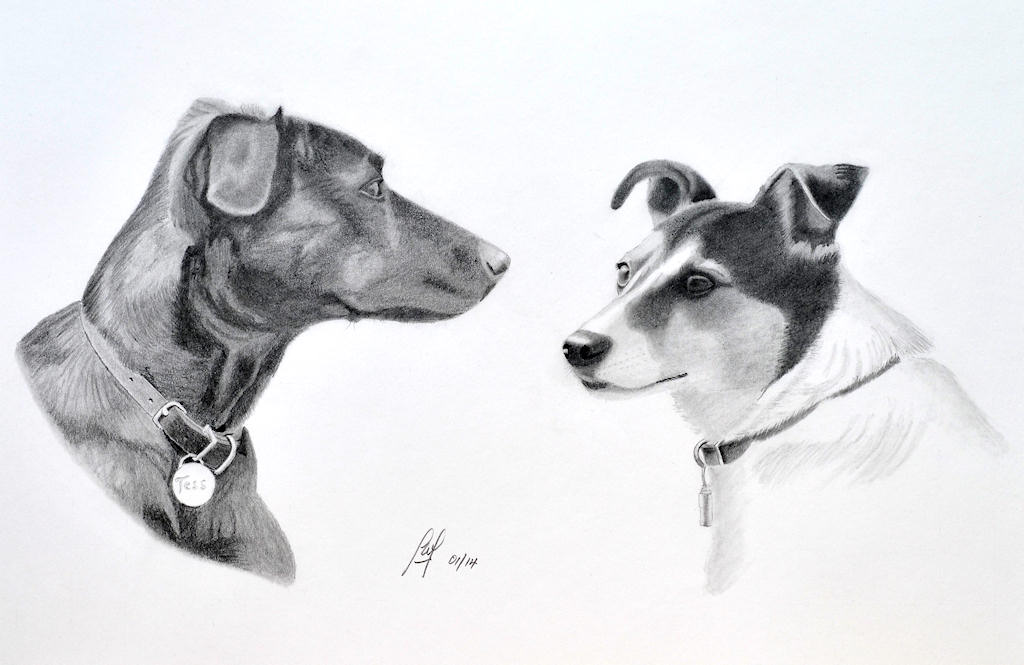