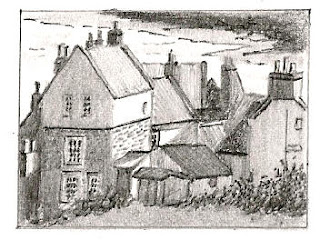 In my art forum we have a number of projects going on for us all to join in with. I haven't had a lot of time for my art over the past few weeks but found myself with the best part of an hour available so I looked at the challenges to see what I could do.

The result is this quick sketch of Robin Hoods Bay on the Yorkshire coast. I'm the first to admit that it's not the best drawing I've ever done.

What I AM pleased about is that the topic I chose to do was "Small". This sketch is only 4cm x 3cm (approximately 1½" x 1"). I've never drawn so small before but found it much easier than I'd expected. Stating the obvious, keeping the pencil sharp was essential (understatement). Under normal circumstances we have to reduce our images to get them online but this time I've had to enlarge it. LOL.

I show the sketch here with some postage stamps just to put it into perspective. 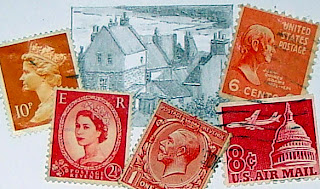 This was a fabulous practice exercise and was great fun. I shall be doing more if these miniatures.


I had finished breakfast a short while ago and crossed to the window of my 367th floor apartment. The aircab was approaching and would soon park on my landing bay. I had packed my case the night before and was almost ready to leave for sunnier climes, but I just needed this last painting to be produced. 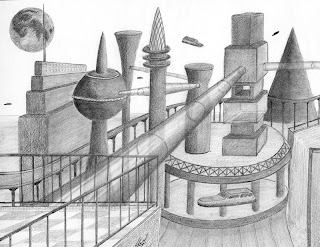 During an idle moment I had imagined what is probably the finest landscape I've ever envisaged. It's beauty is nothing short of breathtaking. As soon as I realised what an outstanding image had developed in my mind I summoned MICRA (Mental Image Capture and Replication Artistry) to process my thoughts and create the painting. The client I have in mind for this piece is a lover of old English oils, so I elected to have MICRA emulate the style of Constable. I've often wondered about the way paintings used to be produced and I can't help but think that, although it was a hugely messy and often hit and miss process, it must have been extremely rewarding when a painting came together as intended.


LOL .... Forgive my inane ramblings. The truth is I treated myself to a new Rotring Rapid Pro mechanical pencil and I couldn't wait to try it. I made a couple of random shapes to see how it felt in my hand, and then I tried a bit of shading to see how well I could control tonal values. Then a few more shapes .... then some more shading ... and one thing just led to another. Had great fun!!! The pencil? Love it!!!

On another matter, I am in the process of reorganising my garage and would like to tell you about some future projects. I have come across a bag of Tile offcuts from when I had my bathroom done. I kept them so I could have a go at a mosaic or two. I've also found some large sheets of Hardboard that used to be the backing to a wardrobe AND a few dozen tins of paint that are the remnants left over from various room redecorations. All the colours are wrong for painting anything serious but I think I'm going to spend this winter in my garage having an absolute ball!!!


Last Sunday was my 65th Birthday. Yippee .... I once again have a source of income. When I retired early last April I was unable to start collecting my retirement pension so I've been one of the countries 2.53million unemployed, and technically NOT a pensioner. Well now I am, and after 46 years continuous employment during which my longest absence was 2 weeks a few years ago following surgery on my shoulder, I am very proud of my long and conscientious work record. I've never ever taken a 'sickie' ... not one. Hey, you've all seen those car stickers that say "Child on board", well my daughter sent me one that says "OAP on board" ... I love it!!! She has a great sense of humour and also sent me a T-shirt with the words  "I don't want to .... I don't have to ... You can't make me ... I'm retired".

I had lots of great presents and as a special treat my wife booked us into a converted barn on a farm in the Cotswolds, near Broadway. Though I was away on holiday, I didn't spend a huge amount of time painting/drawing as we went out everyday to see places of interest, and when we arrived back at the 'barn' we were staying in, I used the time to catch up with a bit of reading and watching some DVD's I'd received as presents. Still, I did manage a little art, and I'd like to share it with you. 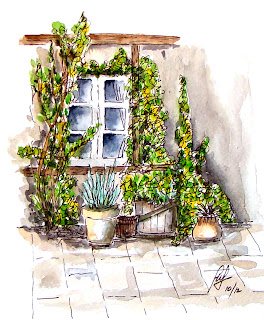 One of my presents was a small set of Faber-Castell PITT artist pens containing Sepia ink. I was keen to try them so sketched a collection of pots and containers sitting beneath one of the windows. Pen & Wash is one of my favourite mediums and I haven't held a brush for quite a while, so it felt really good once I'd finished the sketching and started to apply some colour. It really wouldn't have mattered how this one turned out as I was just enjoying the process to the max, but as it happens, it turned out quite well and I'm really, really happy with it. 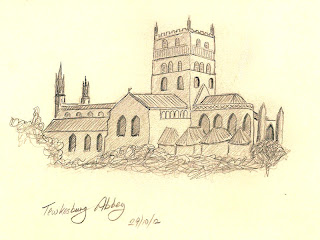 On Monday we went to Tewkesbury. I had heard tell of "the hidden charms along narrow alleyways where the eaves of crooked timber buildings nearly touch". I had visions of streets like the famous "Shambles" in York. Disappointingly, the claims are either grossly exaggerated or we failed to find them. But we did find the famous Abbey only for it to start raining just as we pulled into the Car Park. As we sat in the car waiting for the rain to finish, which it didn't, I did this sketch in my Moleskine. The ex-accountant in me won't let me discard my Moleskine until it's full, but I may have to give in and toss it ... I really can't get on with it. 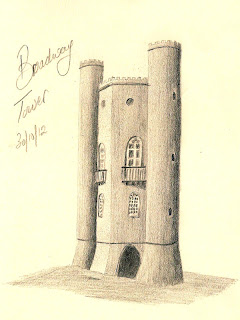 Tuesday found us visiting the nearby village of Broadway and the famous Broadway Tower that sits high on the surrounding hills. The tower is an odd shape having an hexagonal core flanked by 3 cylindrical towers (yeh, I know, I've only draw two - lol). I took lots of photo's from the top of the tower and was amazed to discover that, on a clear day, some 16 different counties can be seen over a distance of 62 miles. I started the sketch standing in the field at the tower but finished it later back at 'the barn'. I found the Moleskine resisted my every attempt to achieve a smooth graduation of tones and it was hard to get the graphite to take once a couple of good layers had been laid.

Another pressie was an Introductory set of 10 tubes of Windsor & Newton Designers Gouache and I'm waiting until I am able to have a long and uninterrupted session before opening them.

With some DIY tools, a set of Olympic stamps for my collection and a bottle of my favourite Talisker Whisky, I've been very well treated and consider myself very, very fortunate. What's more, I can now apply for my free bus pass. lol.