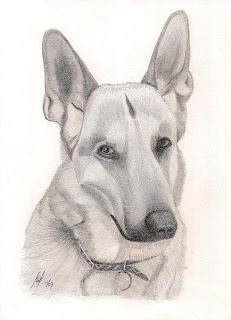 This is a pencil portrait of 'Rosie', a German Shepherd owned by a friend of ours. I drew Rosie when she was a puppy but the only reference photo I had was of her looking into the bright sun with a very significant squint. I considered drawing her eyes open but they are so important that, without some reference, I was worried it wouldn't look like her.

Now she is a teenager. It's interesting drawing her without the fluffiness she had as a pup. Regrettably, the best photo of her had closed eyes again, but this time I had other photo's with eyes open that I could refer to.

I was in the process of scanning the image when my friend arrived. We were talking as the scanned image of Rosie scrolled down my monitor. My friends face was worth it's weight in gold because I could see for myself that she'd recognised Rosie straight off.